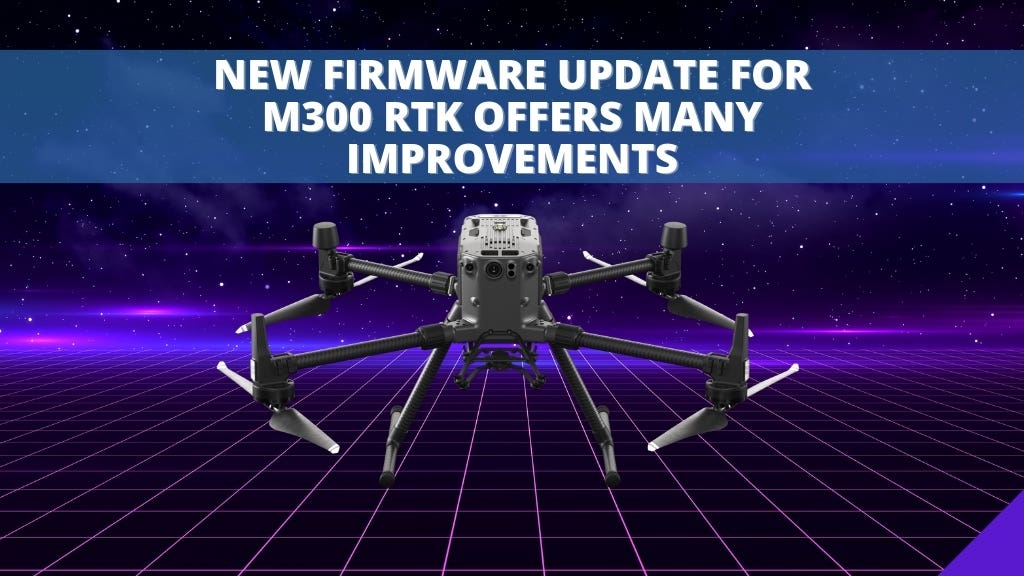 After some users reported battery problems after installing the software update released by DJI on May 13, 2022, which added support with FlightHub 2, DJI Pilot 2, and H20N as well as updates to L1 Terrain Follow, DJI has published a new firmware update for the M300 RTK. The following are fixed by the most recent firmware upgrade (v04.00.01.11):

•Fixed a sporadic problem where, after updating the firmware to v01.02.05.43, the Intelligent Flight Battery required maintenance and was unable to be utilized for flight.

•Fixed a sporadic problem where, after updating the firmware to v04.00.01.10, flight route data in the Mission flight files would not display in the flight route library.

•Fixed bug: When clicking the PSDK shortcut button in the video transmission window, the app crashed.

Click here for a complete description of the updates.

Updated firmware for the DJI M300 RTK and L1 payload adds new and improved functionality, such as support for DJI FlightHub 2 and improved L1 effectiveness.

In addition, the new DJI Pilot 2 app, which features a redesigned enterprise flying interface to improve flight safety and task efficiency, is now functional with the M300 RTK.

Support for the H20N night-vision sensor is also included in the upgrade.

The Terrain Follow missions are made more effective by cutting the total length of the route and the number of waypoints, thanks to the L1 firmware upgrade (v04.00.01.06), which also offers several optimizations for the mapping payload.

Keep reading for more details on how the new firmware upgrade will benefit M300 RTK pilotes:

Thanks to the new firmware update, the following advantages are now available to M300 RTK operators:

•Zenmuse H20 series now has support for both visible light and infrared cloud mapping; with both DJI Pilot 2 and DJI FlightHub 2 able to check mapping data.

Please be aware that the most recent version has been upgraded to support the use of DJI FlightHub 2 with the M300 RTK and Zenmuse H20 series. Zenmuse P1 and Zenmuse L1 are currently not fully supported.

The new firmware upgrade adds support for the DJI Pilot 2 app, which offers more task effectiveness and flight safety, including the following upgrades:

•The home screen has been improved, and there is now support for seeing the GEO Zone map, albums, and device health status; as well as managing duties related to unlocking licenses, cloud services, and flight routes.

•PinPoint size was modified to reflect the distance between it and the aircraft, and support for displaying an icon showing the locations of the Home point and PinPoint was introduced.

•Warning messages are now timely and appropriately presented, and that the history of warnings can be conveniently seen.

•Support has been added for managing PinPoints, adding lines and sections to the map view, as well as adding, removing, selecting, and viewing PinPoints using the 5D button.

With the latest firmware upgrade, the M300 now supports the DJI Zenmuse H20N.

The H20N is the newest member of the H20 series, and is optimized for night vision using light-amplifying starlight sensors. It is perfectly suited for search and rescue, public safety, and security operations in dimly lit areas. Like the H20T, it also features thermal, zoom, and laser rangefinder capabilities.

The firmware update introduces various optimization features for the M300, including:

•Prioritizes charging the top and bottom paired batteries in the battery station first.

While pressing the Confirm button, the zoom camera can be operated with the right dial.

Add support for cameras with a minimum zoom of 1.3x in the H20 series.

•Additional assistance for saving Live Mission collecting data while flying (Note that AI Spot-Check still requires that the images be downloaded after landing).

•During flying, tasks can be stopped and picked back up in camera view.

•The names of the waypoints are now used to name the images and videos.

•The highlight of the firmware update’s impact on the L1 firmware includes improvements to the effectiveness of Terrain Follow missions.

•The route's overall length and the number of waypoints have now been decreased by optimization of the terrain following algorithm.

•DJI discovered that the V4 firmware update increased efficiency by more than 40% during a Terrain Follow optimization test.

•When taking pictures with the mapping camera, it is now supported to create original satellite observation and record files.

•When using Mission flight, an addition was made to set the forward overlap (visible) parameter for the mapping camera.

•Fixed an uncommon issue where images would occasionally not be collected during photogrammetry missions.