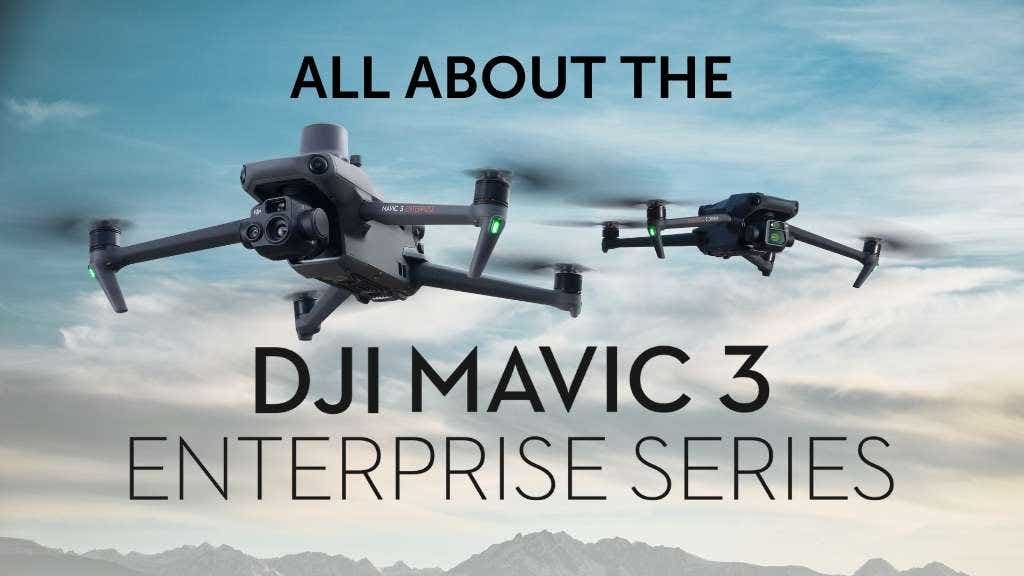 The Mavic 3 Enterprise series is the newest Enterprise drone from DJI and is designed for professionals and enterprise users who need a powerful, yet easy-to-use drone solution for their business. The new Mavic 3E and Mavic 3T drones are packed with features that make it an ideal tool for a variety of applications, including aerial photography, mapping, surveying, search and rescue, and more.

At first glance, the new Mavic 3 Enterprise might seem to be similar looking to the Mavic 3. However, there are some major differences designed to elevate this drone to a professional level.

The airframe is equipped with omnidirectional obstacle sensing, and thanks to the built-in wide-angle vision sensors and the advanced pilot assistance system, the aircraft can continuously sense objects in all directions and navigate around them with ease.

When the advanced return to home feature is enabled, setting the optimal route back to home point can be quickly carried out without the need to traditionally climb to a preset altitude first. This means that the Mavic 3 Enterprise can avoid obstacles and land more smoothly and safely than ever, without the pilot having to worry about the drone automatically raising to a preset altitude and hitting something above the drone. Additionally, all Mavic 3 Enterprise models support the same intelligent flight modes as the previous Enterprise series drones.

The airframe of the Mavic 3 Enterprise has been strengthened so that it can handle higher intensity missions. Additionally, there is now a PSDK port, which can accommodate options such as the official DJI RTK and speaker modules, in addition to PSDK options from third-party manufacturers. Additionally, the new DJI RTK module is smaller and lighter than before.

Unlike the Mavic 2 Enterprise series, which had a beacon light as a modular accessory, the beacon is now integrated into its design so that it does not occupy a port that could be used for other attachments. This means that it is now possible to have even more modular functionality at one time than was previously possible.

Despite all of the new additions, the Mavic 3 Enterprise series is not larger. In fact, the combined weight of this aircraft and its battery is only slightly higher than 900 grams, making it even lighter than its predecessor Mavic 2 Enterprise series.

The two models in the Mavic 3 Enterprise series come with different integrated cameras, and it is important to understand which one is for your mission.

The Mavic 3E features both wide-angle as well as zoom visual cameras. The wide-angle camera has a 4/3 CMOS sensor, can record 4K video at 30 frames per second, and has a true 20-megapixel resolution. It also has a mechanical shutter option, which helps prevent rolling shutter effect.

Additionally, the pixel size has been increased to 3.3 microns, which helps optimize data collection in low-light environments with Intelligent Low-Light Mode. The zoom camera features a 1/2 inch CMOS sensor with a resolution of 12 megapixels. The Mavic 3E boasts 56x hybrid zoom, using the wide angle camera's 1-7x digital zoom before switching to the zoom camera for up to 56 times digital Zoom.

In general, the Mavic 3E will be the one to choose if you are looking to do surveying, mapping, or inspections without a thermal camera.

The DJI Mavic 3T is created specifically for aerial use in areas such as firefighting, search and rescue, inspections, and night missions. It boasts a tele camera with the same 48 MP sensor as the Mavic 3E, and a 1/2” CMOS sensor. Additionally, it has a radiometric thermal camera providing 61° DFOV and 640 x 512 px resolution at an equivalent focal length of 40 mm.

In addition to 28x continuous digital zooming on the Mavic 3T's thermal and zoom cameras, it features a simultaneous split-screen zoom function for simple comparisons.

Both the Mavic 3E and the Mavic 3T have a flight time of 45 minutes and a hover time of 38 minutes without wind. These are some impressive specs for a drone of this size. The Mavic 3 Enterprise series also has the ability to use a 100-watt fast charging adapter, which allows you to charge your drone at a faster rate.

You can bring your battery from 0 to 100% in 70 minutes, and from 0 to 90% in 47 minutes using the 100 watt adapter and charging Hub. This means less time charging and more time flying.

The Mavic 3 Enterprise series requires the use of the new RC Pro Enterprise controller, which is included as standard in the box.

The built-in high-brightness screen has 1,000 nits of illumination, which allows for clear visibility even in direct sunlight, as well as an integrated microphone for crystal-clear communication.

Additionally, there is a built-in mic for the speaker, and the RC battery itself lasts for three hours, with the ability to be charged while in operation. One thing to note regarding the RC Pro Enterprise is that there is no swappable battery.

The Mavic 3 Enterprise series builds on DJI's tradition of placing a priority on safety by incorporating more capable obstacle sensing and navigation systems to help novice drone pilots stay safe. DJI AirSense is a system that picks up ADS-B transmissions from conventional aircraft in the area to alert drone pilots of other air traffic in the area.

The all-new DJI APAS system 5.0 for obstacle sensing is supported by six omnidirectional fish-eye sensors, giving you a complete view of your surroundings without any blind spots.

The Mavic 3 Enterprise series includes new tools that combine accessories and software, and they are designed specifically for use in professional settings.

Support for network RTK, custom network RTK services, and the D-RTK 2 Mobile Station are included in the RTK Module, which is what makes it possible for surveying professionals to achieve centimeter-level accuracy.

The D-RTK 2 Mobile Station is an upgraded version of DJI's high-precision global navigation satellite system (GNSS) receiver. It is compatible with all of the major global satellite navigation systems and offers real-time differential corrections.

When the Speaker is plugged in, pilots will have the ability to broadcast a message from above, which will improve the efficiency of search and rescue efforts. Additionally, the Speaker will support text-to-speech, audio storage, and looping.

The DJI Mavic 3 Enterprise series of drones are at the center of a highly developed and expanding ecosystem of software for drone operations.

The redesigned DJI Pilot 2 flight interface was developed with the goal of enhancing both the effectiveness of piloting and the safety of flying. The controls for both the drone and the payload can be accessed with a single tap. Users have access to the hardware of the drone, as well as the video live-stream and photo data.

Drone operators are able to effectively manage flight operations with route planning and mission management with the help of DJI FlightHub 2, the cloud-based operations management system for DJI drone fleets.

DJI Terra is a comprehensive mapping software that can be used for all aspects of the job, from the planning of missions to the processing of both 2D and 3D maps and models.

When conducting inspections, professionals can use DJI Thermal Analysis Tool 3.0 to analyze, annotate, and process images taken by the Mavic 3T using DTAT 3.0. This enables them to identify temperature irregularities more accurately.

Customers of DJI Enterprise demand the highest possible levels of data protection and privacy . The Mavic 3 Enterprise series provides state-of-the-art security features to safeguard the integrity of data generated during sensitive flight, including photos, videos, flight logs, and other data.

To address the needs of flight operators whose flights that are involved in critical infrastructure, government projects, or other sensitive missions, the DJI Pilot 2 flight control app will no longer send or receive any data over the internet once the Local Data Mode has been activated.  Additionally, the radio connection between the aircraft and the remote controller uses a strong encryption algorithm called AES-256.

To sum it up, the all-new DJI Mavic 3 Enterprise series of drones are designed for professional use, and include a variety of features that make them more capable and safe to fly. These new drones come with the latest obstacle sensing technology, support for network RTK, and a full software suite that makes it easier than ever to conduct inspections or manage flight operations. Additionally, the Mavic 3 Enterprise series provides top-of-the-line data security features to keep your data safe during sensitive flights.

If you're interested in learning more about the DJI Mavic 3 Enterprise series of drones, contact one of our UAV solutions specialists to learn more.